A changing of the guard was a central theme at the recent Canadian Horticultural Council (CHC) annual general meeting. Held in Ottawa from March 13-15, the meeting attracted 150 delegates to review and debate policy – and to honour those for outstanding service to horticulture. 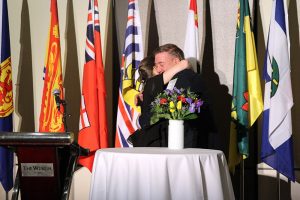 Rebecca Lee, CHC Executive Eirector, gave an Honourary Life Membership Award to Craig Hunter for his 40-plus years of service in the crop protection sector and his longstanding role as technical advisor to CHC’s Crop Protection Advisory Committee. Among his many accomplishments, in 2003, he was part of a small but important group at CHC that was instrumental in lobbying government to establish the Pest Management Centre. Since then, he has been a facilitator of the related Minor Use Priority Setting Workshop. He is a familiar face at international meetings such as the NAFTA Technical Working Group on Pesticides and at CODEX Alimentarius meetings of the World Health Organization and the United Nations. Craig will be retiring at the end of June 2018 from his current research and crop protection role at the Ontario Fruit and Vegetable Growers’ Association. 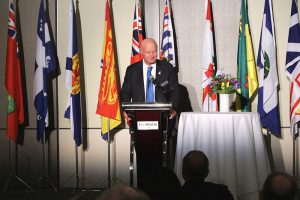 The Outstanding Achievement Award recognized apple and blueberry grower Charles Stevens for his dedication and service as a CHC member. He has served for more than a decade on CHC’s Crop Protection Advisory Committee and as chair for the last five years. Thanks to his efforts, the Pest Management Regulatory Agency (PMRA) has become much better at registering new active ingredients. His leadership has helped to secure the resources and guidance that PMRA needed to make this happen.

During his tenure as chair, the number of PMRA re-evaluations has escalated to more than 30. About 100 new re-evaluations are scheduled for the next five years. Stevens and his committee have become actively engaged in submitting feedback during this re-evaluation exercise. To help tackle this issue, he was instrumental in the creation of a new full-time position at CHC and helped to hire a new crop protection manager to oversee the workload.

Outgoing CHC president Alvin Keenan presented the Doug Connery Award which was created in 2012 to honour a past president and driving force behind CHC. This award recognizes individuals who have demonstrated exceptional leadership, passion and dedication and who have made outstanding contributions to the industry at local, provincial and national levels. This year’s recipient is John MacDonald who has spent more than 40 years in CHC activities, including 1983 as president. He has been a member of the Potato Producers Association, Potato Marketing Board, Blueberry Growers Association, the Farmers’ Union and the PEI Federation of Agriculture. He and his wife Pam operate East Isle Farms in Souris, Prince Edward Island. They grow blueberries, strawberries, raspberries, cranberries and blackberries as well as a small amount of potatoes and mushrooms. His rolodex of political connections continue to be put to work to the betterment of rural concerns and horticulture.

(with text courtesy of www.thegrower.org)