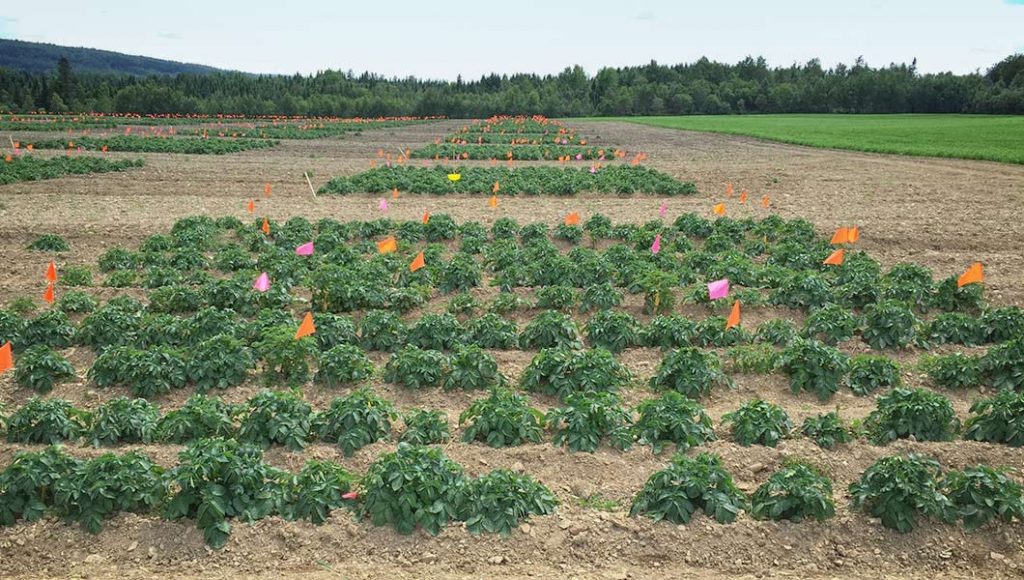 One of the oldest known plant viruses in the world, Potato Virus Y (PVY), has been managed by commercial potato producers with varying levels of success for many decades. Canada, like other potato producing nations, is now having to grapple with new, more aggressive and faster-spreading strains of PVY that are making it more challenging to control the disease.

Spread during the crop season by aphids, PVY can also be transmitted through infected seed lots and by mechanical means such as post-tillage practices. It is actually a complex of several strain groups and genetically distinct variants within those strains. In recent years, PVY populations in Canada and around the world have been rapidly shifting from the traditional PVYO strain to novel recombinant strains.

Mathuresh Singh, the director of Agricultural Certification Services for Potatoes New Brunswick, is also the project lead for a major research study into the development of more effective strategies for managing PVY. The Canadian Horticultural Council (CHC) is co-ordinating the five-year project, which is being funded by the Canadian Agri-Science Cluster for Horticulture 2 and potato industry partners. The research is slated to wrap up next year.

“The CHC plays a very important role,” says Singh, adding that the organization acts as bridge between researchers and the funding agencies and also helps distribute project findings to grower groups in different provinces.

According to Singh, the study has led to a greater understanding of the three major strains of PVY in Canada—PVYO and the newer strains, PVYN:O and PVYNTN—and their impact on commercial potato varieties. The research has also identified Best Management Practices (BMPs) for reducing the spread of PVY.

The study has confirmed that more necrotic strains of PVY are displacing PVYO in several important potato-growing provinces in Canada, as has been observed in other potato producing areas around the world. Necrotic symptoms cause tubers to form rings, Singh explains, “leading to losses in yield as well as quality.”

Researchers have also catalogued the impacts of each of the PVY strains on 27 commercially important potato varieties, with plans to boost this total to 30 by the end of 2017.

Among these varieties is Russet Burbank, the main processing potato in Canada. It’s highly susceptible to PVY but typically only shows foliar symptoms, according to Singh. “We have not found any tuber symptoms in Russet Burbank in any of our screens, but we did see some loss in yield,” he adds. “The disease reduces the plant vigour and that leads to less tuber production.”

As Singh points out, the research is helping to illuminate why PVY continues to pose problems for producers.

For instance, in many varieties, the new strains exhibit distinct and typically cryptic symptoms compared to PVYO. As a result, Singh explains, rogueing operations to manually remove infected plants from the field during the growing season are often less successful, as are traditional seed certification techniques such as visual inspection and winter grow-out of seed samples in comparison to post-harvest laboratory tuber testing.

The research also shows growing evidence that transmission efficiency is higher for these recombinant strains than for PVYO.

Singh adds that the rapid rise of PVYNTN is particularly worrisome, and not just because of its high transmission rate. Most potato cultivars with this strain will exhibit mild or absent foliar symptoms, he explains, but in three susceptible varieties (Yukon Gold, AC Chaleur and Envol) it can cause necrotic tuber lesions that can render an entire crop unmarketable.

Singh notes that the study has identified a number of commercial varieties, such as Innovator and Monticello, that are less susceptible to the novel PVY strains in terms of visible symptoms and tuber yield loss. The study also found that two varieties, Eva and Musica, appear to be resistant to infection with any strain of the virus.

The study has also produced a number of Best Management Practices (BMPs) for growers that involve the combination of mineral oil and insecticide spraying that act to minimize on-farm PVY spread on seed potato farms (spray applications of mineral oil isn’t permitted in processing potato operations). Frequent mineral oil spraying that starts early and continues all season long, supplemented often with insecticides in a simultaneous spray, have shown the greatest potential.

According to Singh, the spray programs were tested through stringently controlled and replicated field experiments in New Brunswick in 2014 and 2015 and in Manitoba in 2015 and 2016. The results from the PVY trials were recently published in the American Journal of Potato Research and they’ve also been widely presented at numerous potato conferences and grower meetings in Canada and the U.S.

“Our trials were conducted across two cropping seasons and two very different potato growing regions of Canada, yet the results and recommendations from them are consistent and, thus, should be generally applicable across the country,” Singh confirms.

A key recommendation for processing potato growers is planting certified seed that’s either PVY-free or has extremely low levels. “The first strategy is starting with clean seed,” suggests Singh. “If there is no PVY, there is no inoculum that can spread the disease, even if you have a lot of aphids.”

Growers wishing to learn more about BMPs for PVY management can contact Singh at (506) 459-0293 or msingh@potatoesnb.com.