Representatives from four different government departments and departmental organizations recently made the trip to Norfolk County, known as “Ontario’s garden”, to observe the Seasonal Agricultural Worker Program (SAWP) in action. Officials from Employment and Social Development Canada (ESDC); Service Canada; Immigration, Refugee and Citizenship Canada (IRCC); and Agriculture and Agri-Food Canada (AAFC) participated in a two-day tour, which stopped at twelve farms and included greenhouses and packing facilities. Government officials picked the farms they wanted to visit, so as to make sure they were seeing typical SAWP environments, and not just ones hand-picked by the tour organizers. At each stop, tour participants talked with workers in group and private settings, and visited several bunkhouses of different ages. There did not appear to be any abuse of workers, unacceptable housing, denied health care or deprivation of human rights, contrary to concerns that had recently been reported in the media. Participants agreed that the tour provided an excellent opportunity to learn and exchange information that can help improve administration of the program and support growth in the sector.

Interdependence of SAWP workers and farmers

There is an interdependent relationship between farmers and SAWP workers. Farmers on the tour explained that, without the SAWP, they would not be able to grow fruit and vegetables in Canada. Workers also benefit by being able to send their kids to school and improving their living arrangements back home.

Academic evidence of how SAWP workers and the Canadian economy mutually benefit from one another has been provided by the Universities of Guelph and York, the Agri-Food Economic Systems, and the Inter-American Institute for Cooperation on Agriculture (IICA). The evidence states that, for every worker the SAWP employs, two full-time Canadian jobs are created elsewhere in the value chain. According to IICA, “the agri-food sector, just like other sectors, has become a global workplace. Canada’s seasonal programming enables farm businesses to meet their seasonal labour needs, while providing economic support for workers from developing countries, with added potential of ongoing agricultural cultural exchange that allows for an exchange of ideas, innovation and technology.” IICA research further reveals that “SAWP benefits to employees include increased opportunities to purchase homes and vehicles in the workers’ home countries, […] increased opportunities to educate their children, better healthcare, increased savings, and increased opportunities to purchase land and livestock.”

To make their workers comfortable, farmers build seasonal housing, called bunkhouses, that are strictly regulated by municipal and provincial building codes and are regularly inspected. One farmer on the tour had recently finished a $300,000 retrofit to his old home for his seasonal workers, following Ontario building code and municipal regulations, after he had moved himself and his family into a smaller house.

The retention rate of SAWP workers is remarkable, with many workers returning to Canada for more than 40 years to help harvest fruits and vegetables. Murray Porteous of Lingwood Farms and Chair of the Canadian Horticultural Council’s Labour Committee emphasized how “important it is to treat your workers with respect. These people have become like extended family for those of us on the program and tour participants met workers who have chosen to come to Canada on the SAWP for over 45 years.”

The communities that host the workers also try to make them feel at home. In Norfolk County, the community has reached out to welcome workers and is increasing its multicultural activities. The workers make regular visits to town where they participate in local church services (the local church pays for a pastor from the host country to come for special services), put on festivals, and host game nights and soccer tournaments. 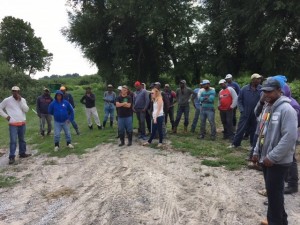 Seasonal workers from Jamaica return to the same Canadian farms year after year. This year, a Canadian who is deaf but wanting to work hard also joined Lingwood Farm. Photo: Janet Krayden (CAHRC)

Why the SAWP is critical to Canadian agriculture

There are lots of jobs available on fruit and vegetable farms, but not enough Canadians willing or available to fill them. Farmers on the tour reported they are doing everything they can to hire Canadians first, by posting their job ads continuously on more than one online job board, including the federal Job Bank, in local newspapers, and at the post office, but they are receiving little to no response.

If Canadians are not available to pick fruit or vegetables, one of the ways farmers fill this labour gap is by using the SAWP, which celebrated its 50th anniversary in 2016. Consumers enjoy eating fresh fruit and vegetables and eating local is very popular, but not all consumers know that SAWP employees from Barbados, Eastern Caribbean, Jamaica, Mexico, Trinidad and Tobago help care for and harvest fresh fruit and vegetables destined for Canadian tables.

According to Porteous, “On our family farm, we rely on Jamaican workers through the SAWP to fill our vacancies. We hire approximately 80 workers on a seasonal basis. Of the Canadian applicants we get every year as a result of advertising, only one person has shown up for an interview in the past 10 years.” He further explained that “without access to foreign seasonal workers, our farm would be out of business immediately and the full-time Canadian workers at the fruit packing plant would be out of a job too.”

The SAWP, which pre-exists the Temporary Foreign Worker Program (TFWP), is a well-run program with strict rules. It was introduced over 50 years ago because of the intensive labour requirements to grow fruit and vegetables in Canada, and farmers’ unique challenges to find people to work on their farms. These challenges include: rural locations, handling of live plants, unpredictable weather, physically demanding work, and a limited growing season.

Research conducted by the Canadian Agricultural Human Resource Council (CAHRC) shows that the labour gap in 2014 for horticulture commodities was 35,700. The SAWP in 2014 enabled Canadian farmers to successfully fill this seasonal labour gap with 35,000 seasonal workers. Over the next decade, fruit and vegetable farmers’ challenges to find workers will intensify as the domestic workforce is anticipated to continue shrinking. By 2015, this labour gap is expected to increase to 46,500 for horticulture commodities. Over half (53%) of the work required on Canadian farms is seasonal. These are jobs that do not provide full-time, year-round work. Because Canada’s growing season is so short, our Canadian seasonal farm workforce is a very important part of producing food, where “winter is coming” is more than just an ominous saying from the popular TV show Game of Thrones. 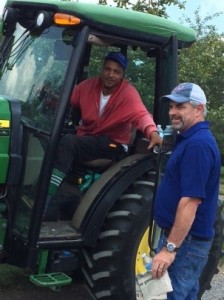 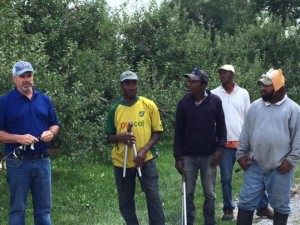 The tour showed that fruit and vegetable farmers are making huge technology investments to increase productivity. Innovation is being adopted both in the field and in the packing barns to make farm operations more efficient and to decrease dependency on labour. This is backed up by Norfolk County statistics, where Norfolk growers are ranked number 1 in Canada for technology usage. Another indicator is that farm capital investments in Norfolk Country, including land, buildings, livestock and machinery was valued at approximately $3.3 billion in 2016. The benefit to the Canadian economy from the Norfolk region included $519 million in total gross farm receipts in 2015.

Technology, however, can only take farmers so far. Some jobs cannot be replaced by machines; hard work will always be needed. On the farm tour, Jacklynn Ryder, formerly a school teacher who now owns and operates a farm with her husband Jason, said “Nothing can replace the human hand when it comes to green bunch onions.” Ryder, a farmer with young children, laughingly explained how, when they drive their fresh green onions through town, people often say it makes them hungry for hamburgers. She also explained how she has travelled with her husband to many different farm operations in other countries looking for technology to replace the picking and banding of the onions with elastics. “There is just nothing out there that can knock off the dirt and put the elastic around the onions faster than the human hand,” Ryder explained.

Next time you go to the grocery store, ask for Canadian grown local fruit and vegetables and remember the hardworking hands that feed us. 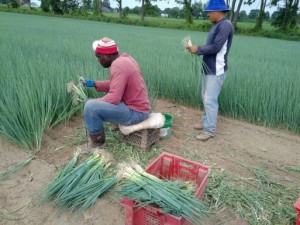 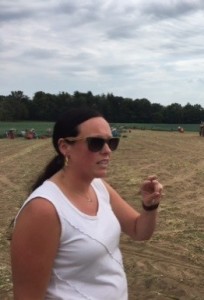 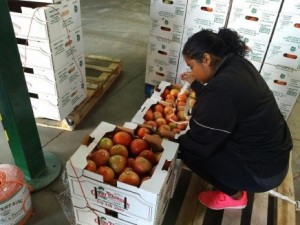 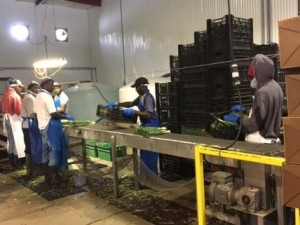 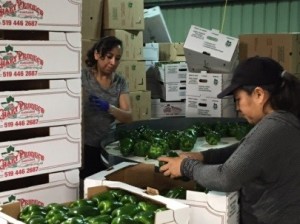 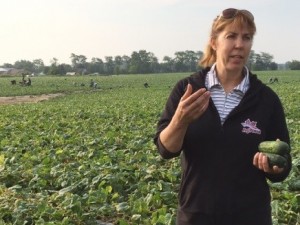 In the field with Miriam from Chary Produce 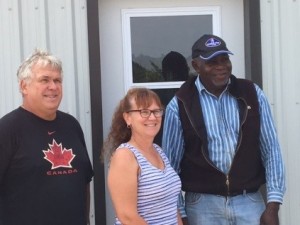 Magalas family with Willie, a SAWP employee who has been returning for 49 years. 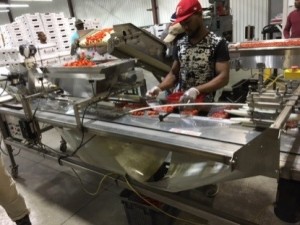