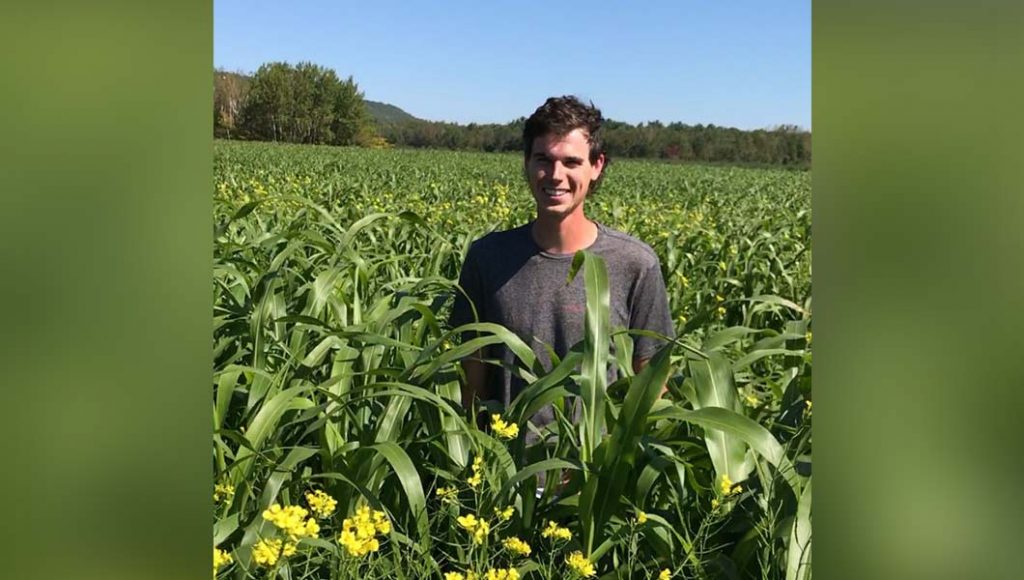 Harrison Van Meekeren is a third-generation apple farmer in Lakeville, Nova Scotia, managing the crop on property his grandfather Frank bought back in 1964 to grow vegetables, apples, and other fruit that he sold door-to-door.

Today, Van Meekeren Farms comprises a bustling apple packing facility, along with 100 acres of trees that produce Honeycrisp, Pazazz, Ambrosia, Gala, Macintosh, Golden Delicious, and Cortland apples that are marketed under the Wink brand. Van Meekeren, 24, manages the farm’s orchard operation, while his father and uncle run the other aspects of the business.

“I’m really enjoying it,” says Van Meekeren, who’s been able to inject some new ideas into running the orchard operation since he took on the job two years ago. He’s particularly excited about the potential of cocktail cover crops, a practice he introduced to the farm in the spring of 2017.

A cocktail cover crop involves plants from five different families— cereals, grasses, brassicas, legumes and chenopods—that, when grown together, have been shown to increase humus building in the soil.

“There’s quite a phenomenon that happens when you plant all of these together,” says Van Meekeren, who planted a mixture of buckwheat, mustard, sorghum-sudangrass, pearl millet, and clovers in the tractor rows in between the lines of apple trees on his farm.

Van Meekeren observed that the cocktail cover crop not only increased soil organic matter and helped to reduce weeds, but it also provided habitat for beneficial insects and microbial life, which helped to lower pest pressure. This cut down on the need for pesticide sprays, and applications of other inputs were reduced as well.

“The biggest things I noticed was more earthworms in the soil, the number of bees visiting the orchard, and increased soil moisture. Also, compaction in the tractor rows seemed to be less in those rows planted with cover crops,” says Van Meekeren.

According to Van Meekeren, the key to successful cocktail cover crop is finding the right ratio that enables all of the different plant species to thrive. He planted cocktail cover crops in both the spring and autumn of 2017, adjusting his plant mix the second time around. “It was a learning experience,” he says. 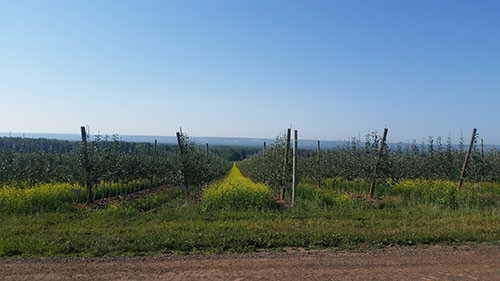 Van Meekeren believes there needs to be a paradigm shift in how the agricultural industry in Canada views biodiversity of the kind that a cocktail cover crop can provide.

“When you are in nature, you are never going to see one plant species in a monoculture like we have these days. We’re doing our best to mimic nature, and hopefully that will bring beneficial insects, fungi, and bacteria to help with our pest management as well with our soil life below ground,” he says.

“What determines our tree health is our soil life,” adds Van Meekeren. “When we create this mass of biodiversity and we increase our soil life, we’re reintroducing and strengthening the microbe bridge that helps the plant take up the minerals it needs in a more efficient way.”

“What we’re doing when we do a cover crop is actually taking that carbon from the atmosphere and…bringing it back into the soil,” he says.

According to Van Meekeren, cocktail cover crops are gaining popularity in places like Australia and some European countries, where they can be used to help farmers claim carbon credits for increasing the amount of organic matter in their soil.

Van Meekeren says he’d welcome such a system in this country and believes that everybody would stand to benefit.

“I hope to see them everywhere,” he says. “I’d love to see farmers in Canada and the rest of the world…start to use systems like this to help bring our carbon dioxide levels back to where they used to be.”