The Canadian Horticultural Council (CHC) is pleased to present its new President and Board of Directors for 2017-2018. 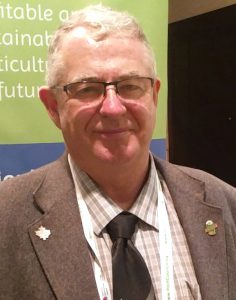 CHC’s Board of Directors has appointed Alvin Keenan, of Prince Edward Island, for the 2017-2018 term. Alvin started working with CHC in 1983. Since that time, he has advocated on a wide range of issues, including trade and marketing, labour, and crop protection. He currently operates Rollo Bay Potatoes with his brother Ray and their families. They are dedicated to quality, care for the environment, and incorporating the newest and most innovative technology into their operations. Alvin inherits the Presidency from Keith Kuhl, who held the position from 2013-2017.

CHC and its members look forward to much continued success working with Alvin Keenan and its new Board of Directors.