The 96th Annual General Meeting of the Canadian Horticultural Council took place in Ottawa from March 13-15, 2018. By all accounts, the event was a success. More than 150 delegates from all over Canada participated in over 30 standing committee and working group meetings for an update on activities and to discuss issues pertaining to labour, crop protection, industry standards and food safety, business risk management, and trade. Commodity committees also met to discuss issues pertaining to apples, potatoes, berries, field vegetables, and greenhouse vegetables.

Members reviewed, discussed and adopted 21 resolutions that will guide the activities of CHC throughout 2018. The majority of the adopted resolutions pertain to crop protection issues, followed by trade, and then labour issues. 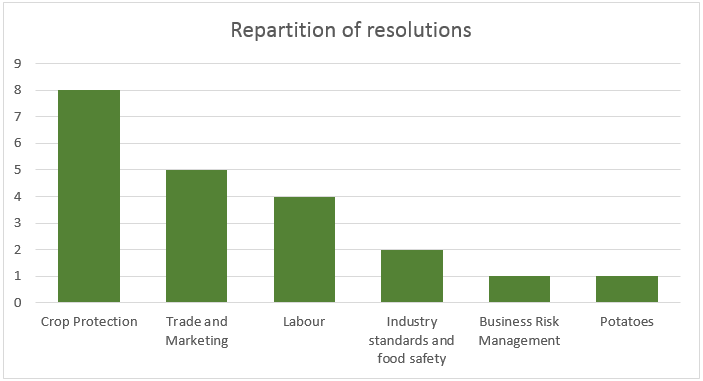 CHC recognized three special individuals with awards at its 96th Annual Banquet. Rebecca Lee, CHC Executive Director, handed out the Honourary Life Membership Award to Craig Hunter for his 40-plus years of service in the crop protection sector and his longstanding role as technical advisor to CHC’s Crop Protection Advisory Committee. She then presented the Outstanding Achievement Award to Charles Stevens for his dedication and service as a CHC member. Alvin Keenan, CHC President, then took the stage to present the Doug Connery award to a fellow PEI farmer John MacDonald who has spent more than 40 years in CHC activities, including as President in 1983.

For the first year ever, CHC took advantage of its members already being in Ottawa to organize a series of advocacy meetings with government. In just one morning, CHC led 15 meetings with senior department officials and ministerial staff from Agriculture and Agri-Food, Global Affairs, Employment and Social Development, Health, Immigration and Refugee, Environment and Climate Change, and the Prime Minister’s Office, as well as issue-related staff in the offices of parliamentarians. The meetings helped to further our relationships and to reinforce our key positions with senior government officials.

Thank you to our sponsors

The success of CHC’s 2018 AGM was due in large part to the valuable support of this year’s sponsors: