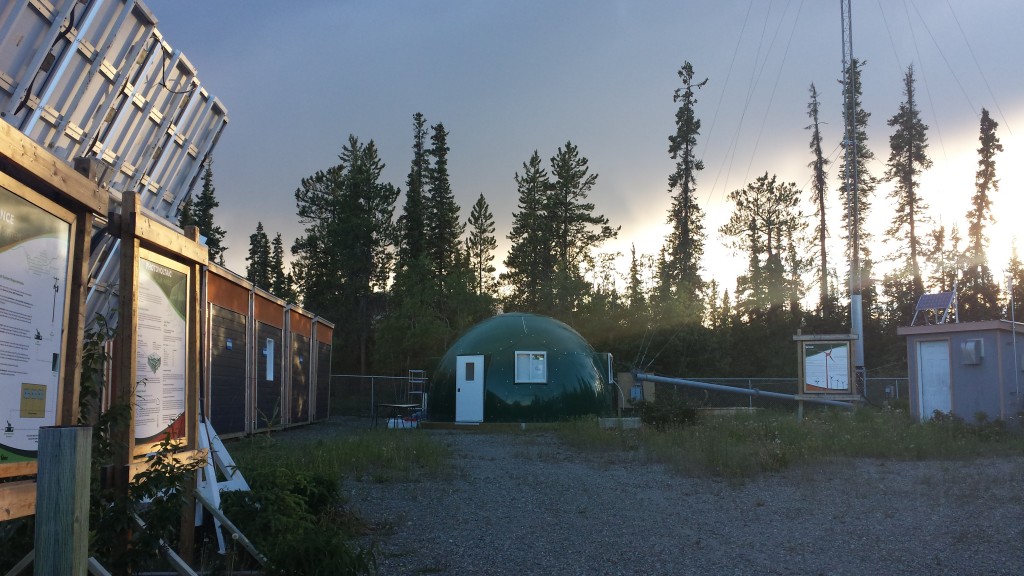 According to a report from Statistics Canada, nearly 10 per cent of Canadian households experience daily challenges associated with food insecurity. This number is four times higher in the remote northerly regions of the country. Government studies have clearly shown that food insecurity is linked to poorer physical and mental health and can lead to chronic conditions, such as asthma or depression. Canada’s horticultural sector does its part to address these challenges through constant innovation and technological advancement. Projects and research initiatives across the nation are working together to make greenhouses more accessible and productive from coast to coast to coast. Whether growers are facing challenges related to reducing heat loss, implementing computer automation, or using BIOReactor technology, their operations can likely benefit from following examples provided by successful projects before them, like the AgriDome, CanGrow, the Inuvik Community Greenhouse, or Vineland Research and Innovation Centre.

The AgriDome, a greenhouse located in the Yukon, approached and designed every aspect of the AgriDome Feasibility Study with energy efficiency and heat loss in mind. Even something as simple the AgriDome’s shape was chosen for its aerodynamic qualities, minimizing the ratio of surface area to internal volume and giving heat the fewest number of paths from which to escape. The AgriDome has also opted to ignore the sun as a source of plant energy, instead exclusively using artificial lighting sources.

“Any structure that’s engineered to let the light in will invariably let the heat out,” says Glenn Scott, founder at Agri-Arctic Inc. “Contrary to what most people believe, the sun isn’t free when you need to heat up your building in the middle of winter and, since heating normally accounts for up to 75 per cent of the AgriDome’s energy budget, we simply couldn’t afford to use the sun.”
Most of the innovations used in the AgriDome project were specifically designed for a harsh Arctic env 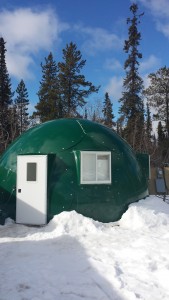 The AgriDome ignores the sun as a source of plant energy, instead exclusively using artificial lighting sources.

ironment. However, several concepts, such as the use of vertical hydroponics that reduce the amount of space needed to produce plants, could certainly be adopted for use further south. The AgriDome was able to demonstrate that, by growing upwards, it was able to productively grow 30 plants per square foot over a 32-square-foot grow unit.

Later this year, the AgriDome will be moved onto Hay River, Northwest Territories and featured in the PoultryPonics Dome Demonstration, which uses both hydroponics and chicken production linked by BIOReactor technology. As part of this demonstration, plant waste will be fed to the chickens and the resultant chicken manure will be digested by the BIOReactor into a usable nutrient solution, which will then be cycled back to the plants. Over the course of this process, the BIOReactor will also produce a substantial amount of heat that can then be used to further reduce energy costs.

Ending just last year, the Aurora Research Institute’s NWT CanGrow project aimed to explore the feasibility of commercial greenhouses in Northwest Territories. Aurora pilot-tested the feasibility of greenhouse operations within two communities in the territory: Inuvik and Norman Wells. During the tests, critical information was collected to enable the design of a prototype greenhouse that would be most appropriate for each location.

The primary goal of the NWT CanGrow project is to put tools and knowledge into the hands of northern community members that could then be used to support their goals for growing food. In pursuit of this goal, the Aurora Research Institute connected local growers with the top minds in greenhouse technology as part of its NWT CanGrow Greenhouse Technology Workshops.
“The expert guests presented technological innovations to an audience of local stakeholders and members of the Northwest Territories’ agriculture community,” says Jessica Dutton at the Aurora Research Institute. “Community members were able to engage these experts in panel discussions about how these technologies could address the unique challenges faced by growers in the Arctic, resulting in a valuable exchange of knowledge.”

The Aurora Research Institute also facilitated the Greenhouse ResearchHack, an event specifically designed to encourage experts to propose solutions to Northern Canada’s specific growing challenges.
Dr. Mark Lefsrud and his team at McGill University were the winners of the Greenhouse ResearchHack for their Canadian Northern Integrated Greenhouse (CNIG) design—a semi-closed system solution built into a shipping container which uses vertical growing systems, LED lighting technologies, and an integrated HVAC and climate control system to provide a flexible, highly-efficient growing space with the potential of year-round usage.

“Last year, we built outdoor beds to expand our space and it did very well,” says Ray Solotki, director at the Inuvik Community Greenhouse. “Our mandate is to promote community through gardening. We see it as not only an opportunity to focus on local food security, but as a chance to meet other people and enjoy a strong sense of community and community pride.”

Moving forward, the Inuvik Community Greenhouse plans to encourage the gardening community to further expand into livestock and hopes to see its first chickens strutting about the space this summer.
Last June, the Niagara Region’s Vineland Research and Innovation Centre cut the ribbon on its new 3,700-square-metre, $10.4 million Vineland Greenhouse Technology Complex, the largest research greenhouse devoted to horticulture in the country. This state-of-the-art facility features new technologies that support and modernize research, focusing on plant breeding and pest and disease control. In addition, this new research greenhouse is also breaking new ground in the fields of robotics and automation  – technologies that are becoming increasingly important to the overall important to the greenhouse industry. 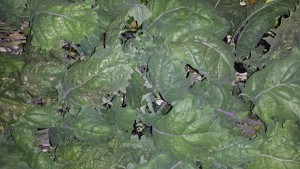 Red Russian Kale grown in the AgriDome, a greenhouse located in the Yukon.

Some of the features built into the Vineland Greenhouse Technology Complex include extensive temperature and humidity controls throughout the greenhouse, high-pressure sodium lighting in the flower section, and below-ground trenching to help reduce shading.